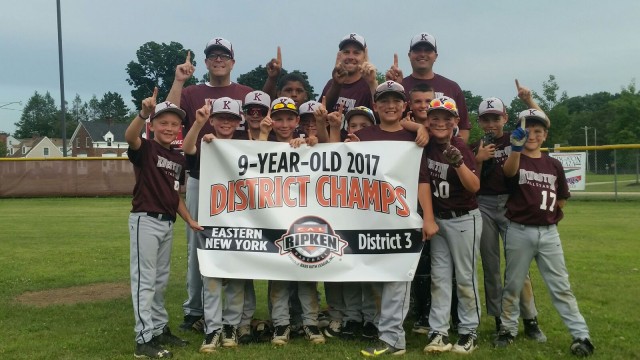 In the District 3 Championship, Kingston cruised behind solid pitching from Preston Provenzano and Gavin Culjak, who combined for a 5 hit, 1 run performance in the tournament final over Highland, with Culjak holding Highland scoreless over the final 3 innings.

In the semi-final contest that helped Kingston clinch the State Championship Tournament birth, Jake Martino and Gavin Culjak combined for a 2 hit, 1 run performance over Orange County winning the game 12-1.  Culjak took over in the bottom of the 3rd inning with the game tied at 1, pitching 4 scoreless innings for the win in that contest.

Kingston’s offense was consistent throughout the District 3 Tournament, scoring a tournament best 59 runs over 6 contests.  Provenzano, Culjak and Martino made solid contributions at the plate as well for Kingston, along with other offensive standouts Wade Holsapple, Ryan Napoli and Keegan Hughes.

The Kingston Cal Ripken 9U All Stars next play in the State Tournament Championship which takes place Friday, July 14 – Tuesday, July 18 in Poughkeepsie, New York.